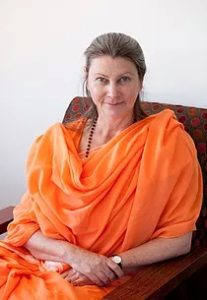 Swamini Amritananda is based in our Nelson centre and is heading activities there along with overseeing the activities all across New Zealand.

Susan Spedding, hails from St. Heliers in Auckland and was brought up a Catholic. At the death of her father at the tender age of 10 years old, she found herself with many unanswered questions regarding life and death. These unanswered questions later kindled the embers of spirituality in her mind and soon they lead her to seeking answers to the shore of India. Having studied community nursing, Susan offered services to many voluntary institutions during her stay there.

Susan was inclined to finding answers to the deeper questions of life but had lost the inspiration to seek it actively. However, destiny brought her to Swami Chinmayananda the first time in Melbourne where she attended his sessions. Further, she found herself registering for a camp at Sidhabari hoping to find some answers to her long awaited questions. Finally, in 1984, her determination and destiny brought her to Sidhabari, where she met Swami Chinmayananda at close quarters and got the opportunity to ask for clarifications on these questions. Swamiji directed her to go to Bombay (now Mumbai) where she would meet an exquisite Teacher who would answer her doubts and that Teacher was none other than Swami Tejomayananda who is the current successor of Swami Chinmayananda. She subsequently did the Vedanta course for 3 years before coming back to Melbourne, Australia to spread the message of Vedanta – as a practical way of living. ​​

Her journey continued as Brahmacharini Bhakti Chaitanya, and she then found her home in 1995 in Nelson. In 2008, she took Sannyasa diksha (renunciation) and is known as Swamini Amritananda Saraswathi.

Currently, Swamini Amritananda continues to be the the Acharya-in-charge of Chinmaya Mission Nelson. She runs the Mission’s activities in Nelson, where she conducts regular yoga classes, meditation sessions & Vedanta study group for adults & children. She is also a qualified YOGA teacher trained in Sivananda Yoga Centre, India.