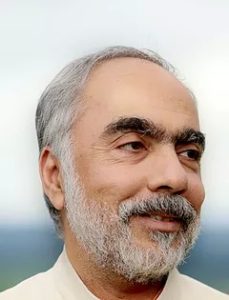 Swami Swaroopananda is the current Spiritual Head of Chinmaya Mission Worldwide. Swamiji is the successor of Swami Tejomayananda who held that role for 23 years since the mahasamadhi of Swami Chinmayananda.

Few men are called to serve humanity the way Swami Swaroopananda does. Fewer actually achieve the unique impact and response that Swamiji has.​

A disciple of the world-renowned Master of Vedanta, and champion of India’s spiritual wisdom, Swami Chinmayananda, Swami Swaroopananda left his family’s thriving business in Hong Kong at an early age to seek what he now calls, “Real answers to real problems”. He was convinced that beyond our everyday, superficial joys and sorrows, there was something more – something higher.
After undergoing intensive monastic training and an exhaustive study of the Scriptures at the Chinmaya Mission headquarters in Bombay, Swamiji returned to Hong Kong in 1986 to spread the timeless message of Vedanta. His name then was Brahmachari Susheel. Under the guidance and inspiration of Swami Chinmayananda and Swami Tejomayananda he would later become the acharya-in-charge of the Far East and other centres throughout the world.

Throughout his speaking career Swami Swaroopananda has held his audiences – adults, youth, and children alike – spellbound by his amazingly practical and extremely user friendly approach to Spirituality. He reminds us that there is a greater and more compelling Truth that provides the solutions to all our problems, enabling us to live a truly happy and positive life.

Since 1995, Swami Swaroopananda has been based at the Chinmaya Dham in Melbourne, where he continues to reach out to spiritual seekers by translating Vedanta into a most effective and relevant way of life for the modern man and woman.

Since 2003, Swamiji had been the Director of Chinmaya International Residential School in Coimbatore, India and presently based there. Swamiji is also the Regional Head of Chinmaya Mission Centres in Australasia Region, the Far East, the Middle East, Europe and Africa.